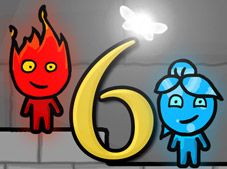 Flameboy and Aquagirl The Magic Temple

About Flameboy and Aquagirl The Magic Temple

There are no 2 player games out there more popular than Fireboy and Watergirl Games, that's for sure, which is why right now we wanted to invite each and every one of you to play the new and awesome game called Flameboy and Aquagirl The Magic Temple, which is a spin-off fan-made game of the original franchise, which can be played by one player, and which is tons of fun, guaranteed!

Just like in the originals, your goal here is to control the two characters, a boy made out of flames, and a girl made out of the water, so that they reach the end of each level, which is represented by a room in a temple, all the way to the final exit, when they will finally exit the temple and escape.

Now, along the way, you have to solve mini-puzzles in order to clear a path, such as opening up doors using levers or buttons, using bridges, moving platforms, and more. This usually requires co-operation, but this time you control both characters and switch up between one another using the spacebar.

To move them you use the right and left arrows, the up one to jump, and with E you interact with items around you. Also, to make points you have to collect diamonds. Flameboy has to grab the red ones, while Aquagirl has to grab the blue ones. Make sure the fireboy avoids the water puddles, and the watergirl avoids the flame puddles.

What are you waiting for? You can start having fun right now, and you won't regret it, trust us!

Use the arrows, spacebar, E key.